The Bayou Jiu-Jitsu League rule set was made by the owners and trusted consultants after simplifying concepts and abiding by established Jiu Jitsu norms in accordance with well recognized international tournaments. It is the responsibility of the competitor and coaches to know the rules prior to the match start.

If you have any questions that are not addressed here or would like clarification, please do not hesitate to Contact Us. 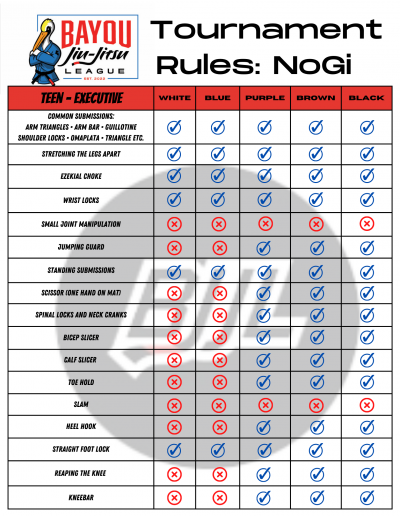 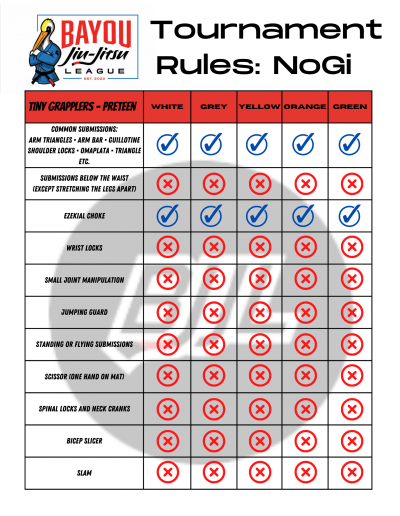 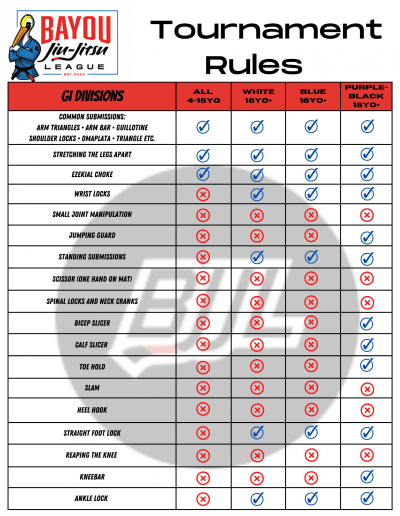 It is sometimes necessary to collapse divisions when bracketing. In this situation, the safety and fairness of the participants is the Bayou Jiu-Jitsu League’s number one priority.

Some ways divisions may be collapsed are as follows:

Ideally, only one option will be needed to find the participant a match, aside from collapsing the genders. Some exception examples include:

In the event you receive a bonus match we will make every attempt for you to compete in your normal division first, before competing in the bonus division.

Four-person division – Bracket begins with the semi-final matches. The second match will be the Finals for the winners and Third Place match for the losers. No consolation matches necessary.

Five+ person division - This is where bracket placement will indicate which competitors are awarded consolation matches. In a five person bracket, the loser of  match one would be offered a consolation match at the end of the bracket. The remaining participants would not need consolation matches because they would still have  a second match in the division.

Competitors will weigh-in the day of the tournament upon arriving. Participants will not be required to weigh with a gi on. Keep in mind the penalty for missing weight is disqualification. We realize home scales may be calibrated differently than our tournament scales, and we offer a 1 lb weight allowance for this reason.

Gray, Yellow, Orange, or Green Belt and be between 7-15 years old. (Teen II Competitors will be eligible for the adult open class divisions.)

Points - Gi and No Gi

For any points to be awarded, all takedowns, guard passes, sweeps, knee on belly, mounts and back control must be held for 3 seconds. Unless a submission is in play. Once the submission is cleared the count will begin.

Back (Back Mount, Back Control, Body Triangle, or Hooks)- 4 points

A competitor wins via submission by forcing an opponent to:

○ The referee has the ability to stop a match when a competitor is caught in a submission that could cause a serious injury.

○ Request the referee to stop the match

○ Crying during a match is a verbal tap

○ Tap with hand on an opponent or on the mat

○ Tap with foot on the mat

*If a coach feels the need to challenge a refs call, video evidence must be provided for the ref to review and it must be called to the refs attention BEFORE the match ends. All changes to calls must be done before competitors leave the mat.

*After a match has been called, questions may be brought to the league managers and clarification will be provided but will NOT change the results.

Please note, you will not receive a refund for any disqualification.

There are multiple ways a competitor can be disqualified.

5. Medical Disqualification- Not limited to, but including: cramping, vomiting, loss of bowels, loss of consciousness, or bleeding that cannot be stopped a second time. Any competitor with a concussion or head injury is not permitted to compete for the rest of the day. If the medical staff rules a competitor to be medically disqualified, then that competitor will not be allowed to compete for the remainder of the tournament. Bleeding, eye pokes, groin hits, and dislocated fingers or toes are given a maximum of 5 minutes to recover.

Competitors must follow the uniform and hygiene requirements to be permitted to compete. Failure to comply will result in disqualification. 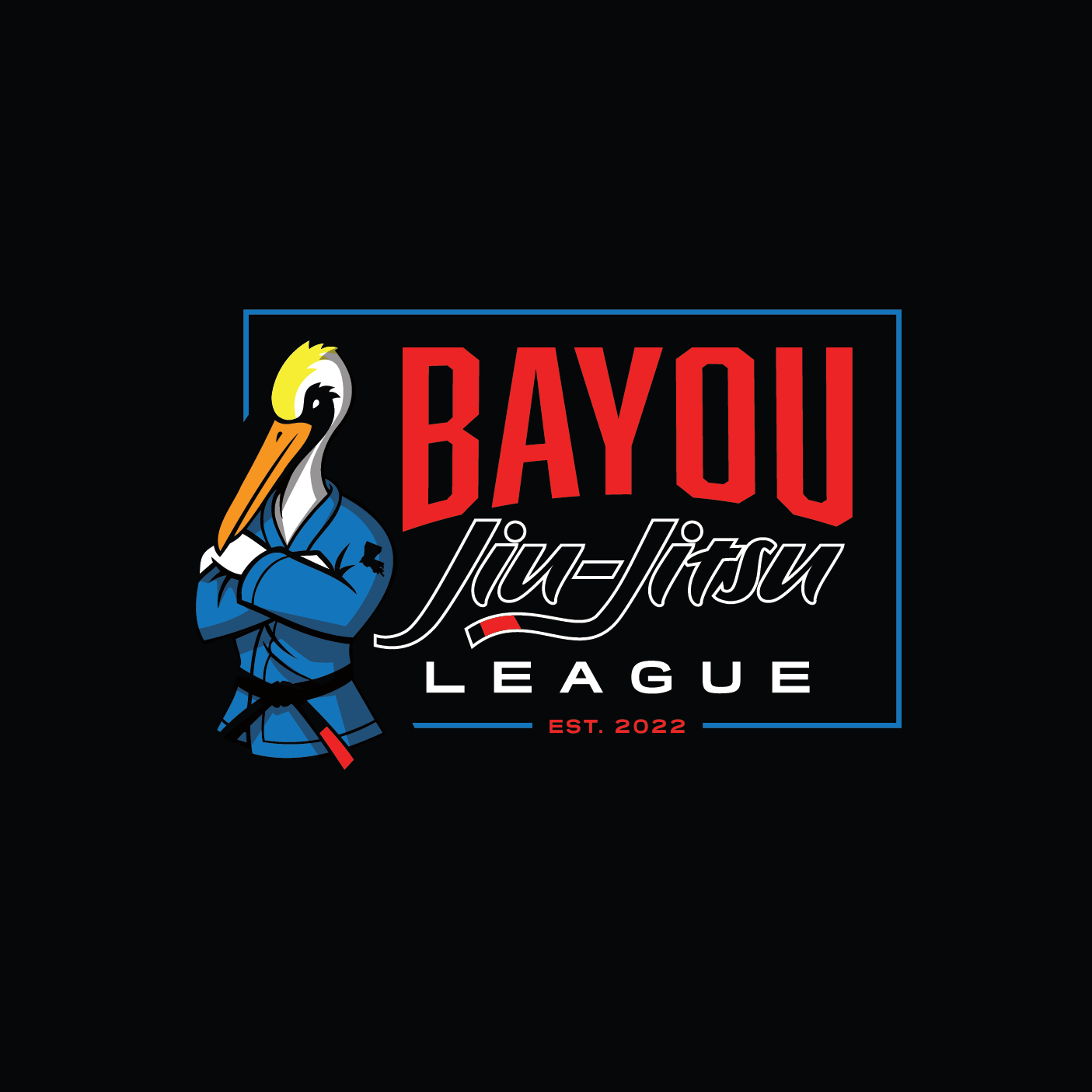 How do I buy spectator tickets?

Tickets will be available at the door.

I registered but now I can’t come to the tournament, can I get a refund?

We know life happens, but no refunds will be issued. Sorry.

Where do I get my tournament tshirt?

When you arrive, you will check in and be given your tournament tshirt.

When do I weigh in?

After checking in, you will be directed to the area of the arena where you can weigh in.

I’m not showing up in the division I registered for. What should I do?

Email us immediately and we will resolve the issue. Once registration closes we will not be able to make any changes the day of the tournament.

Why did my child not have a consultation match?

What time do I compete?

Your staging time(s) will be posted the Wednesday before the tournament. Be sure to arrive to the arena at least one hour before your staging time. It is your responsibility to arrive on time.

What time should I show up to the tournament venue?

Sorry about that, contact us immediately and we’ll help!

Can I wear a t-shirt under my gi?

No. A rash guard must be worn under the gi. 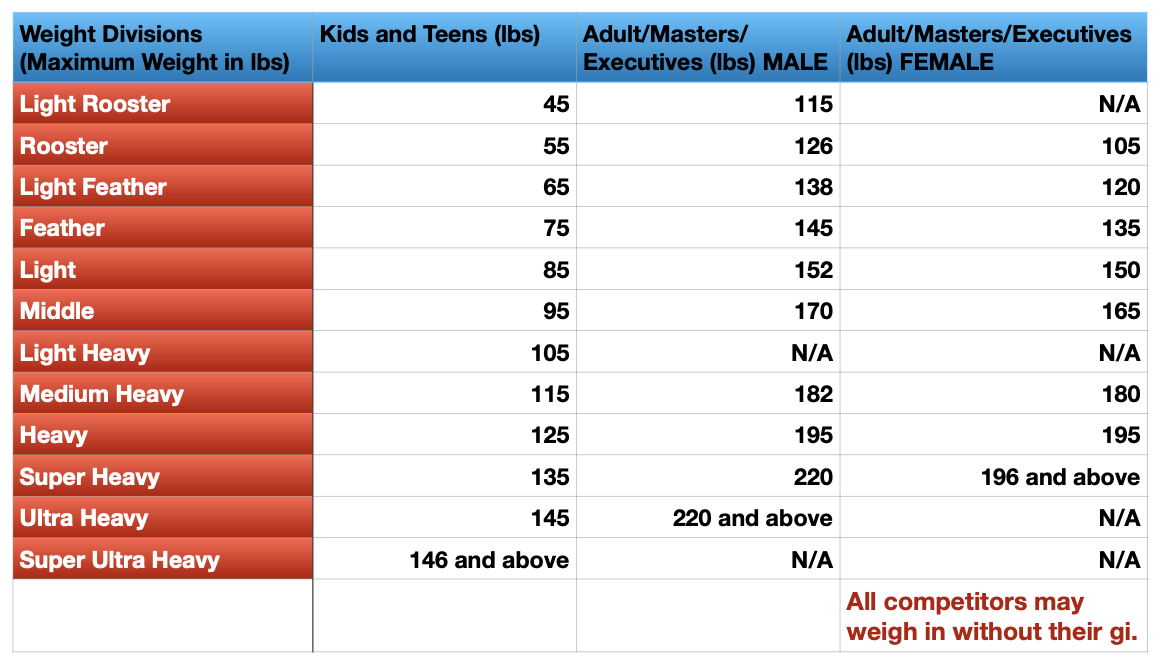